The German Data Forum (RatSWD) agreed on new cooperation activities and initiatives to improve research data infrastructure at its 43rd meeting on 10/11 November 2016. The RatSWD liaised with the ADM Arbeitskreis Deutscher Markt- und Sozialforschungsinstitute, a business association representing market and social research agencies, and agreed on further steps for monitoring and supporting current developments in data protection law and evaluated activities to gain access to health data for research.

"General and specific changes in data protection for scientific use resulting from the EU General Data Protection Regulation. What is important for Data Protection in science in the future?" by Katrin Schaar

On 23/24 June 2016, the German Data Forum (Rat für Sozial- und Wirtschaftsdaten, RatSWD) met with relevant stakeholders for a dialogue on the future development of national and international research infrastructures. There was a consensus that existing structures should be closely tied into future coordination efforts. Specific solutions for certain disciplines should not be replaced by generic approaches and any national activities should be made internationally compatible from the onset. The German Data Forum very much welcomes the recommendations on research data management which were recently published by the Council for Scientific Information Infrastructures (Rat für Informationsinfrastrukturen, RfII). Further cooperation was agreed upon.

Data management plans are increasingly a requirement when applying for project funding. There is no common standard for such plans and the criteria vary strongly depending on the research funders. The German Data Forum created a working group headed by Prof. Dr. Stefan Liebig to offer guidance to grant applicants and funders and to initiate steps toward standardization of data management plans. The working group has developed an extensive set of key questions with a focus on the social, behavioral, and economic sciences which are based on an ongoing exchange with the research data centers accredited by the German Data Forum. The working group’s results have been published as the third issue of the RatSWD Output Series. It is currently only available in German.

The next Census is only 5 years away: Germany still has catching up to do

Five years seem like long time, but, as a large-scale project, Census 2021 still requires much preparation. The German Data Forum (RatSWD) has stated that Germany still has some catching up to do compared to the Scandinavian countries, Switzerland, or Austria. This holds true with regard to the availability of administrative data, the quality of the official register, and scientific quality control. The following summary of the German Data Forum’s report contains recommendations for the future design of the census in Germany. The RatSWD chair Prof. Riphahn and Prof. Dr. Rockmann, chair of the Working Group Census, handed over the report to the state secretary at the Federal Ministry of the Interior (BMI), Mr. Vitt, on 20th June 2016.

A group of German academies have published a statement on the current situation of longitudinal studies in Germany on 9 June 2016. The German Data Forum (RatSWD) welcomes the statement as an important contribution to the sustainable development of the survey landscape, according to RatSWD chair Prof. Riphahn, Ph.D. The German Data Forum will publish its own statement on the framework, criteria, and standards of the German survey landscape in autumn 2016.

The success education systems of the German states (Länder) should be more transparently communicated. The systematic provision of data on the success of different educational approaches and concepts will lead to the improvement of quality and efficiency of education in Germany. These are two results from the expert report “More Transparency in Educational Policy” published by the academic advisory council of the Federal Ministry for Economic Affairs and Energy on 28 April 2016.

The Bundestag has agreed on changes to the Federal Statistical Act on 28 April 2016. Following the recommendations of the Committee on Internal Affairs, the house decided on a 30-year retention period for data from the national business register. Moreover, the periods is now set to begin after a survey has been concluded.

Results of the 41st meeting of the German Data Forum: Recommendations on the census, cooperation with the UK Data Forum, new reporting system

The German Data Forum (RatSWD) convened for its 41st meeting on 31st March and 1st of April 2016 in Berlin.

"Research parasites are beneﬁcial for the organism as a whole: competition between researchers creates a symbiotic relationship" by Benedikt Fecher and Gert G. Wagner

The initiative seeks to fund excellent projects in the humanities and the social sciences that address their research questions using innovative “big data” approaches.

Formerly part of the journal "Schmollers Jahrbuch", "European Data Watch" will continue showcasing relevant data sets for the social and economic sciences under a new name. The "Data Observer" section will be published as part of the renowned "Journal of Economics and Statistics“. The first issue (January 2016) is now available as an open access publication.

In March 2016, the Trans-Atlantic Platform (T-AP) will launch its first international funding opportunity: the T-AP Digging into Data Challenge.

The Federal Ministry for Education and Research (Bundesministerium für Bildung und Forschung, BMBF) appointed Prof. Dr. Mark Trappmann as one of the new representatives of the data production in the German Data Forum. Trappmann has been head of the panel study ‘Labour Market and Social Security’ (PASS) since 2006, which is conducted by the Institute for Employment Research (IAB). He is also full professor for sociology with a focus on survey methodology at the Otto-Friedrich-University Bamberg. The German Data Forum wishes to thank David Schiller, the former representative of the Federal Employment Agency (BA), for his work. 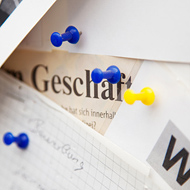